February is Looking Great in Charleston! 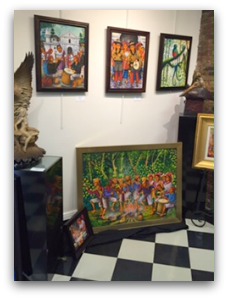 16 of 244 homes under contract were either foreclosures or short sales (fc/ss) and another 15% were new construction.

59 condo/townhomes under contract and 15 were in West Ashley. 0 fc/ss and 6 new construction.

The photo above is of original paintings by Mario Gonzalez Chavajay in Mary Martin Art Gallery on Broad St. in Charleston.  Mario will be a featured artist for the month of February and you will be able to meet him in the gallery on Feb. 17th!

Mario Gonzalez Chavajay - a Tz’utuhil Mayan artist from San Pedro, Guatemala - will be the guest of honor at the 2016 Guatemala Gala. It will be held on held on Feb. 20 at 7:00 p.m. at the Catholic Diocese of Charleston’s Pastoral Center, 901 Orange Grove Road.  The 2016 event will be different than in year’s past.  Instead of a formal evening, attendees are encouraged to dress in casual attire and will enjoy an oyster roast, dinner, beer, wine, silent auction, music and much more!!!